White Moss common is once more under threat, as the application to ‘improve’ it into a visitor hub has been renewed with (very minor) adjustments (the cafe is slightly smaller).

You can see the plans here and here.

This comes as the Lake District National Park Authority are also selling off large swathes of the Lake District, including Stickle Tarn, Baneriggs, and Lady Wood, the wood above Town End which William and Dorothy Wordsworth knew as ‘John’s Grove’ after their brother, drowned at sea in 1805, and which is described in the last of the Poems on the Naming of Places, as below. This is one of my favourite Wordsworth poems, and, I think, particularly evocative of Grasmere and the Lake District more generally. 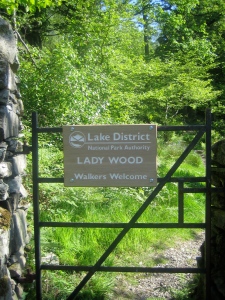 I have been both a listener and leader in walking seminars that have taken students and visitors to The Wordsworth Trust into Lady Wood to hear these words along with that ‘sea-like sound’ coming through the trees. Almost everyone cries, whether they have any interest in poetry or Wordsworth or sailors or woods or not. It’s actually kind of creepy. In my critical work, I argue for the central importance of this poem, and this place to the Wordsworths’ Grasmere, and the Grasmere passed down through their writings.

It’s almost as though no one at the LDNP or Lowther or GoLakes paid attention to that excellent protest poem I posted about back in early November. I don’t know what’s wrong with them. Maybe you do, and would like to write to them to tell them.

‘When first I journeyed hither’

When first I journeyed hither, to a home
And dwelling of my own, it was a cold
And stormy season, and from week to week
The pathways and the publick roads were clogged
With frequent showers of snow. Upon a hill
At a short distance from my House there stands
A stately fir-grove, wither I was wont
To hasten, for within its shade I found
Commodious harbour, a sequestered nook
Or cloister with an unencumbered floor.
Here is safe covert on the shallow snow,
And sometimes on a speck of visible earth,
The red-breast near me hopped, nor was I loth
To sympathise with vulgar coppice birds
That hither came. A single beech tree grew
Within this grove of firs, and on the fork
Of that one beech there was a thrush’s nest,
A last year’s nest conspicuously built
At such small elevation from the ground
That even an unbreeched Boy might look into it:
Sure sign I thought that they who in that house
Of nature and of love had made their home
Among the fir-trees, all the summer long
Dwelt in a quiet place: and oftentimes
A few sheep, stragglers of a scattered flock,
Were my companions and would look at me
From the remotest outskirts of the grove,
Some nook where they had made their final stand
Huddling together from two fears, the fear
Of me and of the storm. Full many an hour
Here did I lose. But in this grove, the trees
Had by the planter been so crouded each
Upon the other, and whithal had thriven
In such perplexed array that I in vain
Between their stems endeavoured to find out
A length of open space where I might walk
Backwards and forwards long as I had liking
In easy and mechanic thoughtlessness.
And, for this cause, I loved the shady grove
Less than I wished to love a place so sweet.
I have a brother: many times the leaves
Have faded, many times the spring has touched
The heart of bird and beast since from the shores
Of Windermere, from Esthwaite’s cheerful Lake
And her grey cottages, from all the life
And beauty of his native hills he went
To be a Sea-boy on the barren seas.
When we had been divided fourteen years
At length he came to sojourn a short while
Beneath my roof, nor had the sun twice set
Before he made discov’ry of this grove
Whither from that time forward he repaired
With daily visitation. Other haunts
Meanwhile were mine but from the sultry heat
One morning chancing to betake myself
To this forsaken covert, there I found
A hoary pathway traced around the trees
And winding on with such an easy line
Along a natural opening that I stood
Much wondering at my own simplicity
That I myself had ever failed in search
Of what was now so obvious. With a sense
Of lively joy did I behold this path
Beneath the fir-trees, for at once I knew
That by my Brother’s steps it had been traced.
My thoughts were pleased within me to perceive
That hither he had brought a finer eye,
A heart more wakeful: that more loth to part
From place so lovely he had worn the track,
One of his own deep paths! by pacing here
With that habitual restlessness of foot
Wherewith the Sailor measures o’er and o’er
His short domain upon the Vessel’s deck
While she is travelling through the dreary seas.
When thou hadst gone away from Esthwaite’s shore
And taken they first leave of these green hills
And rocks that were the play-ground of thy youth.
Year followed year my Brother! and we two
Conversing not knew little in what mold
Each other’s minds were fashioned, and at length
When once again we met in Grasmere Vale
Between us there was little other bond
Than common feelings of fraternal love.
But thou a School-boy to the Sea hadst carried
Undying recollections, Nature there
Was with thee, she who loved us both, she still
Was with thee, and even so thou didst become
A silent Poet! from the solitude
Of the vast Sea didst bring a watchful heart
Still couchant, an inevitable ear
And an eye practised like a blind man’s touch.
Back to the joyless ocean thou art gone:
And now I call the path-way by thy name
And love the fir-grove with a perfect love.
Thither do I repair when cloudless suns
Shine hot or winds blow troublesome and strong;
And there I sit at evening when the steep
Of Silver-How, and Grasmere’s silent Lake
And one green Island gleam between the stems
Of the close firs, a visionary scene!

And while I gaze upon this spectacle
Of clouded splendour, on this dream-like sight
Of solemn loveliness, I think on thee
My Brother, and on all which thou hast lost.
Nor seldom, if I rightly guess, when Thou,
Muttering the verses which I muttered first
Among the mountains, through the midnight watch
Art pacing to and fro’ the Vessel’s deck
In some far region, here, while o’er my head
At every impulse of the moving breeze
The fir-grove murmurs with a sea-like sound,
Alone I tread this path, for aught I know
Timing my steps to thine, and with a store
Of indistinguishable sympathies
Mingling most earnest wishes for the day
When We, and others whom we love shall meet
A second time in Grasmere’s happy Vale.

Composed 1800-4.
Published as ‘When to the Attractions of the busy World’, 1815.
This text from MS. W recalled that ‘The grove was a favourite haunt with us all while we lived at Town-End’ . 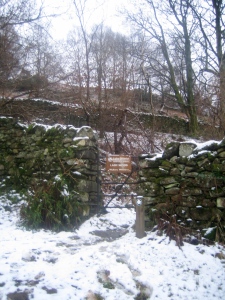