Haemochromatosis is the (slightly misleading) name for Iron Overload, whereby iron builds up in the body to toxic levels, and is stored in the organs, leading to long-term and eventually irreversible damage.

The genetic form – known in the UK as Genetic Haemochromatosis (GH) and elsewhere as Hereditary H[a]emochromatosis (HH) – is caused by a number of genetic mutations, which have a prevalence in the UK of around 1 in 200 people. That’s pretty common for something most people have never heard of.

If you read the title of this post and thought ‘she’s got her metals and mettles muddled’, two things:

One of the things I’m trying to do since my long-delayed diagnosis with Haemochromatosis in 2016 is talk about it as often as I can, as well as writing about it. My hope is that the more people know about it, the fewer will have to wait years for a diagnosis like I did, and the greater understanding there will be of the condition both by the general public and by medical professionals.

A lot of the barriers to diagnosis at the moment in UK actually centre around lack of information for medical professionals: not realising how common it is, the many various and vague ways in which it can show itself symptomatically, the fact it doesn’t just effect older people and post-menopausal women as has long been taught, but people of all ages. The fact it is not just a ‘liver disease’ but can affect any or every organ. The blood markers are raised ferritin levels and/or raised transferrin saturation – two of the many different ways of measuring iron levels in the body – neither of which are tested routinely in the UK. If they are tested, the results are often not understood as indicating GH, especially in the early stages of loading.

So much emphasis is put on making sure you keep iron levels up to avoid iron-deficient anaemia, that very little thought is given to Iron Overload, and that the symptoms – pain and fatigue – might look very similar on the surface, and also look like a lot of other conditions. In some ways, GH is a chameleon condition – because it can affect any and all of the body’s workings, it can show itself in many strange and different ways that  look baffling to most doctors. If you come in with itchy skin, an unseasonable tan, fatigue, mood changes, a sore toe, and absent periods or erectile dysfunction, and no apparent abnormalities in your test results, what average GP is going to put that together and say “aha! GH!” My hope is that in the future, this will be something every GP considers when they are presented with a patient who has multiple seemingly unconnected symptoms.

The lack of awareness of GH and its presentation is one of the many reasons I find the guidance and push towards using Medically Unexplained Symptoms as a ‘diagnosis’ deeply dangerous. You have to be absolutely 100% sure you’ve asked all the right questions if you’re going to sign people’s lives away under ‘no answer’.

At the moment I’m working on non-fiction book under the Penguin Random House WriteNow scheme which explores living with chronic conditions and chronic pain, reflecting on my experiences of living with hEDS and GH, both pre and post diagnosis.

I’ve also been experimenting with different ways to explore chronic illness in my poetry, especially ways to talk about pain and the repetition involved in chronicity. My new pamphlet With Invisible Rain shows some of the ways I’ve been tackling about it, and I hope a lot of this will feed into my second collection.

With Invisible Rain includes three poems from a sequence I’ve been working on called ‘v/s’, which is the shorthand for venesection: the opening of the vein to, in this case, take blood.

In order to get rid of our excess iron, people with GH have to have pints of blood taken out. It is the only treatment for GH, and essential to save us from further problems down the line. The idea is that this makes our body release the iron stored in our organs to make new red blood cells. In some cases it can reverse organ damage if done early enough.

It can be a long and arduous process. Some people feel fine after venesection, others feel really ill and take days to recover. Some people get their pints out weekly, or even twice a week. I got mine taken monthly, because my recovery time was slow due to the autonomic dysfunction I have as a co-morbidity with EDS, including PoTS. This is treated by trying to keep blood volume as high as possible, as well as changing activities to avoid blood-pooling (eg. not standing still, not showering, especially in the morning, doing counter-manoeuvres like pumping your calf-muscles when you go from lying to sitting to standing). Mostly this means drinking a lot of water and eating a lot of salt, so you can see why having regular pints of blood taken out is a problem. I spend all this time trying to put liquid in, and they take out a huge chunk – probably 1/9th of my total blood volume – all at once. After the first horrific month, where my autonomic symptoms were back to the worst they were pre-diagnosis, I started having a pint of saline put in one arm as the blood comes out the other. This doesn’t erase the problem, but it helps. 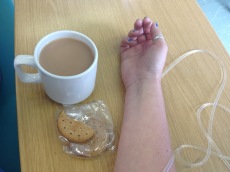 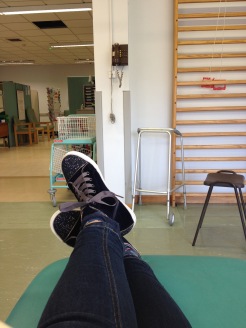 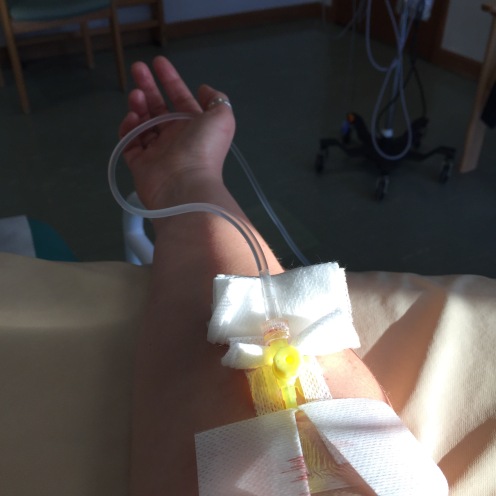 I finally reached ‘maintenance’ – the state where the iron is low enough to just keep an eye on, or ‘maintain’ – in April, over two years after I started venesection. Now I get to see how quickly I reload, and if any symptoms vanish or change.

Two of my ‘v/s’ poems have been published this month in Gush: Menstrual Manifestos for Our Times from Frontenac Press in Canada, and one was on And Other Poems last year, so they’re getting out there.

My GH was picked up during a run of tests by the gastroenterologist I saw when I was first diagnosed with EDS. Without her, I still wouldn’t know. I’d still be getting sicker and sicker and not know why; would still, most likely, be being told that it was nothing, or not real, or that I was imagining it all or creating it myself through my patterns of thought or behaviour. This is how many people with multi-systemic conditions are treated, and women, and especially women from black or ethnic minorities, queer women and trans women are even more likely to be dismissed as creating or imagining their symptoms. There are some excellent books about how gendered  (and racist and classist) these responses can be coming out of the states at the moment, and I’d recommend reading:

Abby Norman’s Ask Me About My Uterus

This is my plea to you for World Haemochromatosis Week.

If you think something is wrong, trust yourself. You know your body. Keep asking. Keep questioning. Don’t take ‘medically unexplained’ as an answer. It’s not an answer. It’s a muzzle. It’s state-sanctioned gaslighting.

If you’re a medical professional and you have patients you’d class as experiencing Medically Unexplained Symptoms … don’t. Look harder. What are you missing? I’m sorry, but you are missing something. Think outside your biases and your teaching. Keep learning. Don’t be afraid to admit you don’t know. Don’t give up on your patients. They need you to believe in them. Your belief will save lives.